We were invited to join Tongue Fu at The Ancient Futures stage in the Tipi Field tonight. Fronted and formed into gloriously chaotic improvisational poetry goodness by Chris Redmond, a band makes magic out of already magnificent poetry. It’s never sounded like this, and it will never be the same again.

First up of our poets: Paula Varjack, with typically cabaret-vibe élan, two pieces about the dangers of dating artists, and the perilous duality of bisexual, femme identity. 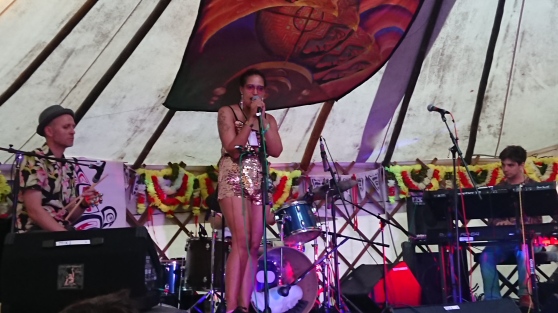 Next up: our illustrator Scott Tyrrell with a cautionary tale about intimacy in the context of family life (the piece that, incidentally, got him into the final round of the BBC EdFringe Slam final (which he the won, obviously). Brace yourselves. 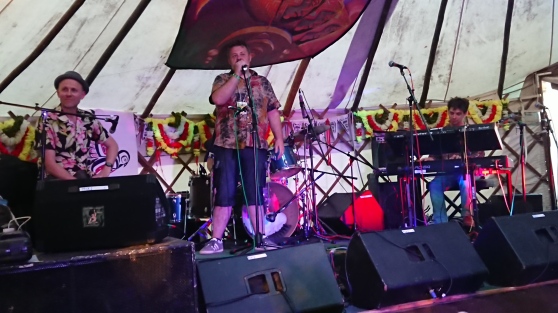 Then, after an anecdote-song by the host about cannibalistic children (don’t ask), I got up to do my bilingual poem Stroke, but I have no evidence, so you’ll have to take my word for it.Next up the pugilistic compassion of our Poet-in-Residence Vanessa Kisuule, giving us her Malleable Manifesto – a way to live, or not, recognising your own divinity. 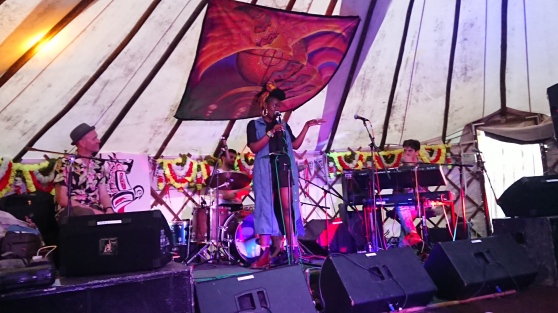 The band expands, shimmying from Vanessa’s instruction to emulate James Brown looking out of the window into an extended riff as as a trumpet joins the line-up, beckoning our current slam champion Jackie Juno to the stage with a poem about how the universe birthed the world with a word – fitting the particular décor of the yurt and elevating it into magic.

Chris then summons long-time co-creative-conspirator Liv Torc to deliver that extraordinary piece about three generations and the impact of truth and hope (as if accompanied by the band on the Titanic).

Chris exhorts the crowd to our feet so we can join in the chorus to his song about us all rowing the same boat, along a similar theme of environmental responsibility, dedicated to Liv, then keeping us there for one more song, decrying the spying capabilities of social media (we all chant “Who’s telling me what?!”). A banging evening, a chance to get to know – and watch live finally – some of the other poets, and a great warm-up for the rest of the weekend!

We sent interview forms out to our artists, and we’ll be sharing their stories here on the blog. Next up:

How did you get into poetry/ spoken word?

Who are your influences/ idols?

What’s the one thing you’d like people to know about your work?

Make of it what you will!

Have you been to Glastonbury Festival before?

What’s your stand-out memory of the Festival?

Naive, 18 year old me dancing in a cage at 3am with a masked man in PVC lederhosen.

Have you performed at Glastonbury Poetry&Words before?

What’s your standout memory of performing at the Glastonbury Poetry&Words stage?

My outfit. My lip stick was blue and I had customized shorts fringed with these stupidly long chains of safety pins. Serious safety hazard, in hindsight!

What words would you use to describe your work/ your act?

What do you like best about doing whatever you call whatever it is that you do on stages?

The motley crew of other poets I get to hang out with.

You can see Vanessa Kisuule at 16:05-16:30 Sunday at the Glastonbury Poetry&Words stage. Read our previous article about her here.

In her own words:

“Vanessa Kisuule is a writer and performer based in Bristol, UK. She has won over ten slam titles including The Roundhouse Slam 2014, Hammer and Tongue National Slam 2014 and the Nuoryican Poetry Slam. She has been featured on BBC iPlayer, Radio 1, and Radio 4’s Woman’s Hour, The Guardian, Blue Peter, Sky TV, Don’t Flop and TEDx. She has performed up and down the country and internationally in Vienna, Sweden, Belgium, Germany, Bangladesh, Barcelona, Oslo, Finland, Romania, New York and Brazil. She has two poetry collections published by Burning Eye Books: Joyriding The Storm (2014) and A Recipe For Sorcery (2017). She was the recipient of The Jerwood Micro Arts Bursary and The Leverhulme Arts Scholarship in 2017 and her one woman show SEXY toured with the support of Arts Council England in 2017/18. She is currently the Bristol City Poet for 2018 – 2020.”

I have been watching Vanessa perform in a variety of places since 2012. I’m fairly sure that the first was a feature slot for Other Voices Spoken Word Cabaret at Edinburgh Fringe. She was in town, we needed a feature, someone put us in touch, and she was free – very simple, utterly wonderful for us. I like to think we provided a nice – if slightly surreal – experience in our haunted, underground cell, draped with fabrics. Only two years, as far as I can tell, into her poetry career, she was already extraordinary, and I’ve only seen her progress in stagecraft, energy, focus, and talent over the years, counting myself excessively fortunate to see her on stages in Edinburgh, London and Cambridge multiple times.

She won major slams fairly continuously from 2010 to 2014, and – like many major slam winners – isn’t “just” a slam poet: her range is breathtaking. She has a real gift for crafting work across the whole of the spoken word spectrum, from the gorgeously intimate and touching, through the powerfully rallying cry, to the unspeakably hilarious, but always, always important.The last nine years have seen her win the Hammer & Tongue National Slam Championship (2014, joint with Layla Josephine), among other titles; play at a slew of major festivals; have two works published by Burning Eye Books; turn up on the BBC (I squeaked very loudly and dragged my partner to watch it on the TV); tour her solo show, Sexy (which I’m gutted not to have seen yet); become Bristol City Poet; and also trounce various rappers under the stage name Shonda Rhymez.

She’s a powerful force for good – an outspoken, sex-positive, proud feminist who pulls no punches whichever power structure she’s lambasting with an exacting vocabulary. I’m so excited to get to see her later this month, and find out what poetry she’s written as part of her Glastonbury residency.