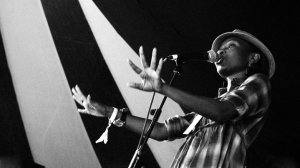 Poetry&Words is the only stage dedicated to poetry at Glastonbury Festival.  Each year we host a variety of poetic talent – spoken word and performance poets, rappers and even the occasional word-loving musician – from the newest names to watch around the UK and beyond, to world-renowned wordsmiths such as Carol Ann Duffy, Jean ‘Binta’ Breeze, John Hegley, Phil Jupitus, Dizraeli and the Small Gods and Kate Tempest.

The Poetry&Words stage at Glastonbury Festival was started by the late, great Pat V T West in 1992, and is now run by Helen Johnson with help from Benita Johnson and a small, but perfectly formed, crew of volunteers. It is one of the best venues in the UK to come and understand what jaw-dropping live poetry really sounds like.

Atilla the Stockbroker by Olga Duprova

As well as a nearly-yearly line-up of unbelievable artists, the stage hosts Glastonbury Festival’s poetry slam, an open performance poetry competition, the winner of which gets a spot on next year’s line up as well as a beautiful hand-crafted slam trophy! Previous winners have included Luke Wright, Andy Craven-Griffiths, Steve Tasane, Hollie McNish and Toby Thompson.

The Poetry& Words stage is in the Theatre and Circus Area of the festival, opposite the Cabaret Tent and runs from 11.45am until 7pm on the Friday, Saturday and Sunday of the festival. It is the perfect spot to sit down, chill out and hear some brilliant poetry before deciding what to do later on.

Most of our line-up is comprised of acts who have entered via our open application process. We have had the immense honour over the years of providing stage-time to up-and-comings who later go on to wow audiences on much bigger stages. If you are interested in applying, you are in the right place – just wait for an announcement here in January for details of how to go about it.

Since you’re here, you may also be interested in visiting us on other platforms.

You can find us on:

And here is the link to the official Glastonbury Festival website.