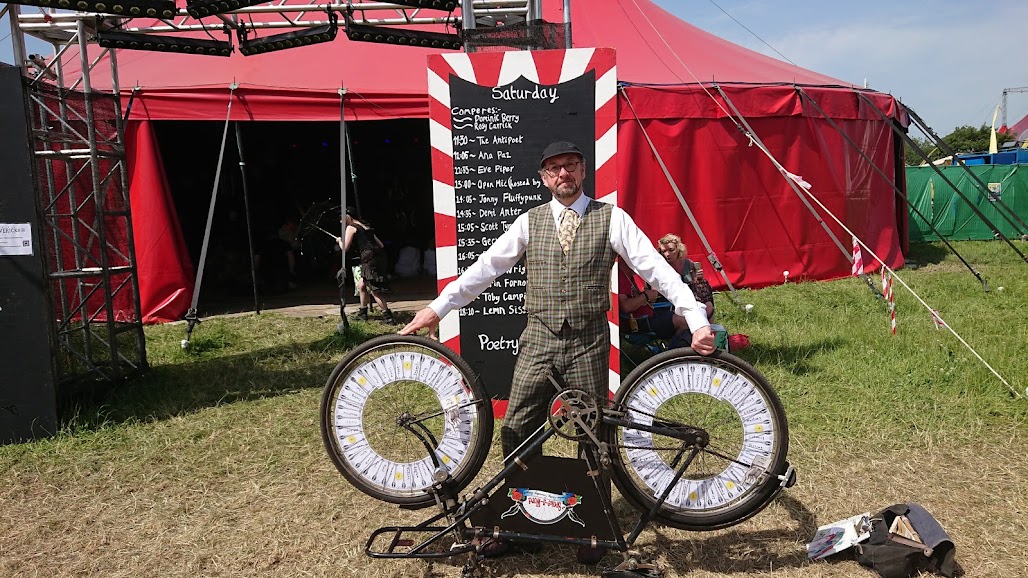 WInston Plowes with his magical contraption is set to capture words

And we’re off! pre-show act The Antipoet kick us off with their classic Glastonbury track We Are The Warm-Up – to an audience of about 40 (which is, for a poetry gig, frankly bloody amazing, let alone on a Saturday morning at a festival). By track three they’re up to 50 (Paul informs me that there are 53 and I should also count the 40 who walked away earlier – duly noted). Clearly ranty poetry in eyeliner and bondage kilts is the way of the future. The set is different, leaning into the swearier stuff they avoided yesterday, summoning a harder laughter from the audience. 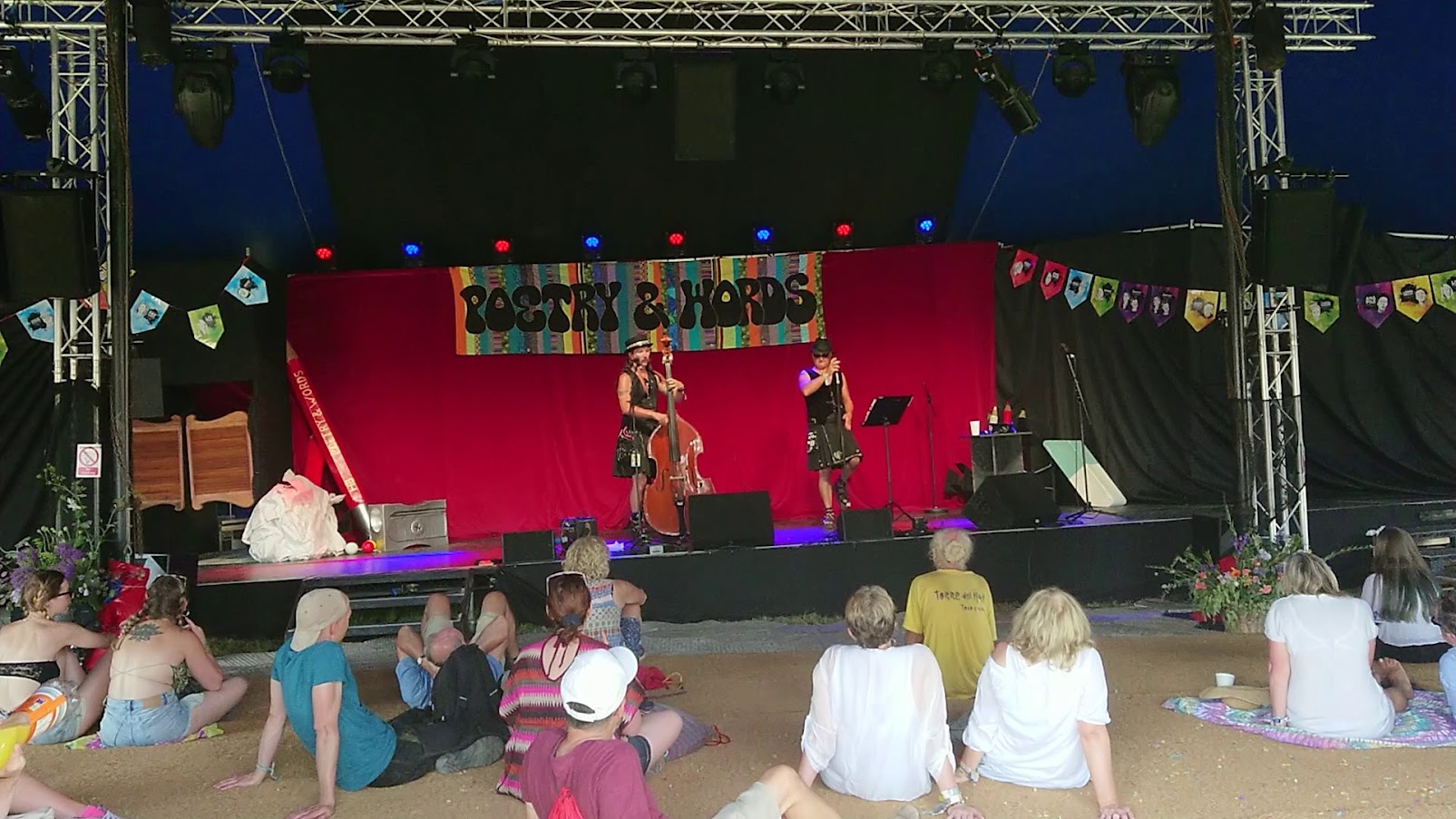 Compere Dominic Berry bounds onto the stage to give a poem on the Myth of Protein. Vegans in the audience particularly love it, cackling along. 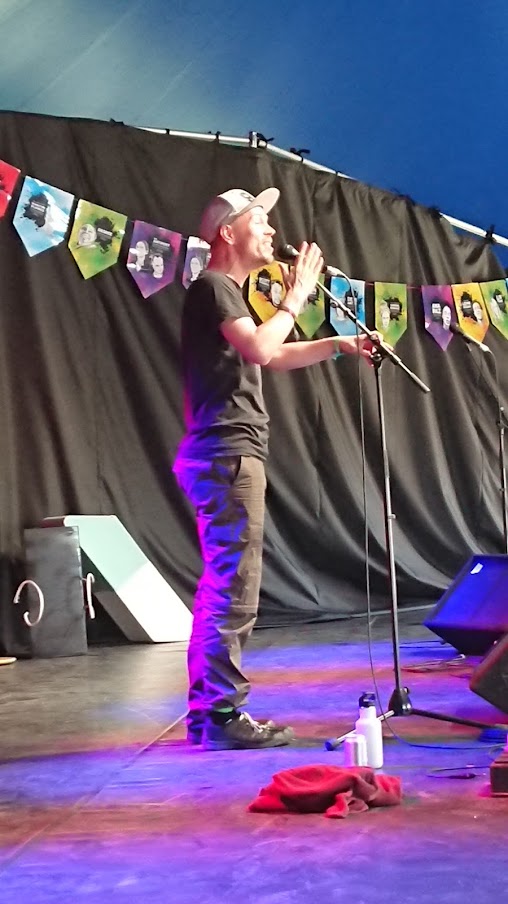 Ana Paz takes to the stage to Move On Up. She stands, silent, for a deliberately, dramatically uncomfortable while, gazes at the audience, collects herself and the witnesses, gives an impassioned piece about the martyrdom of a queer activist of colour (“When I see you, I see me.”), how activism expands into community and history, and how much we still have to fight against, in the memory of Mariana Franco (an assassinated councilwoman from Rio de Janeiro). The rest of her set echoes this, as yesterday – an articulate rage against hypocrisy, the long history of explicit and – more dangerously – implicit messages from society about structural inequity (“I paid attention when my mother told me how to season/ But when a man told me that’s where I belonged, I didn’t listen”). The audience (yes, bigger than yesterday) lap it up, and she encourages hmms and fingerclicks for the next poem where she jumps off the stage to ramp up the intimacy on the topic of truth. She explicitly engineers her set on the fly to match the energy. They are loving the darker, more contemplative stuff, so she leans into that, holding the growing numbers of in the palm of her hand. 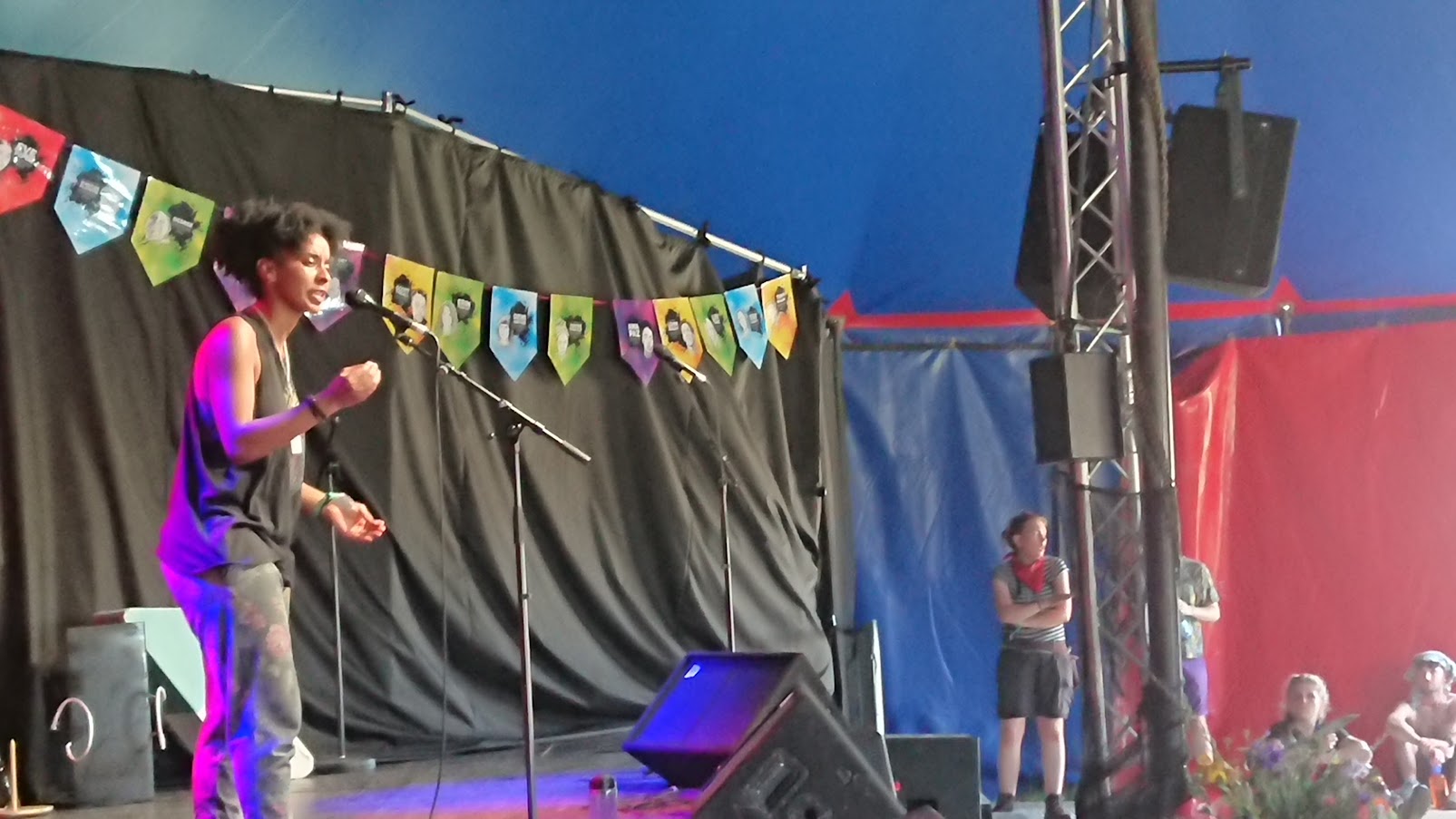 Dominic gives us another barnstormer about veganism, with so bloody many puns about food and masculinity that we’re broadsided when it gets serious and hands us uncomfortable facts about strength and animals.

Eve Piper takes to the stage in a gloriously bright dress. Yeah, I’ve no idea how to talk about clothes, but it’s such a dramatic contrast to yesterday even I notice these things. Right, words then. She starts as before, with a query: who here is single? And who’s keeping their options open? Who’s got their eye on a potential Glastonbury mate? Someone shouts “You, Eve! It’s you!” The set is the same as before, but sounds as fresh and well-crafted as yesterday, and the audience are as hooked, while I tug new favourite moments from the welter of words. 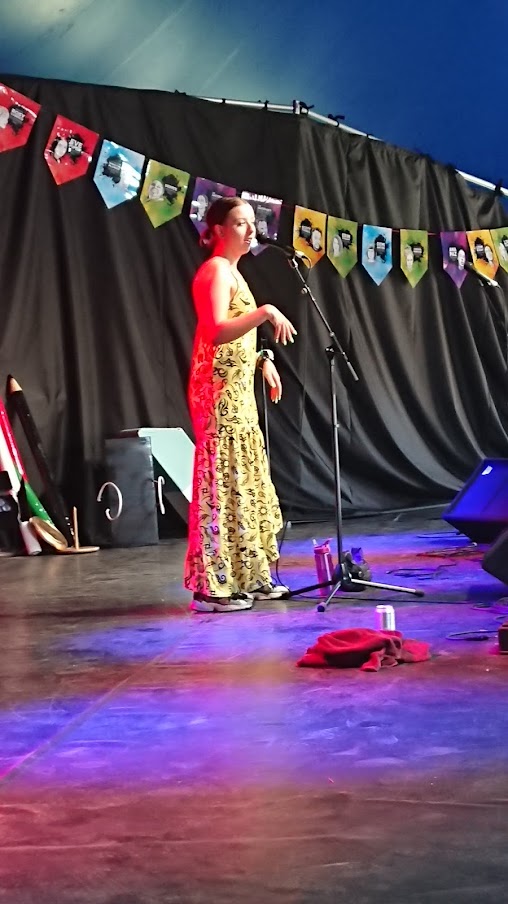 Liv Torc is now hosting the Open mic, kicking us off with verve, and a well-honed delivery of the guidelines (one poem only, don’t go over time or the kazoo and shakers will interrupt you), enthuses and draws people in like the best of hosts. I knew she’d be good! ☺ 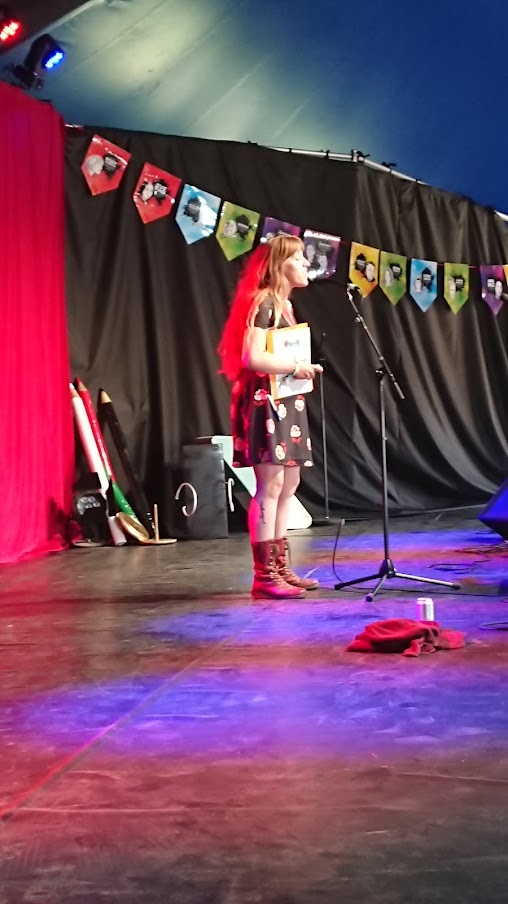 Josie Alford (@josiealfordpoet) gives us the poem she used to propose to her boyfriend (he said yes). She is performing so she can tell her mum she’s performed at Glastonbury. Mark McGivern gives us a poem for one of his oldest friend with a meditation on how to be a fixed point of stability in someone else’s life in all the small gestures. He runs his own spoken word and music events in Cambridge (and I’m so proud to see him on this stage). 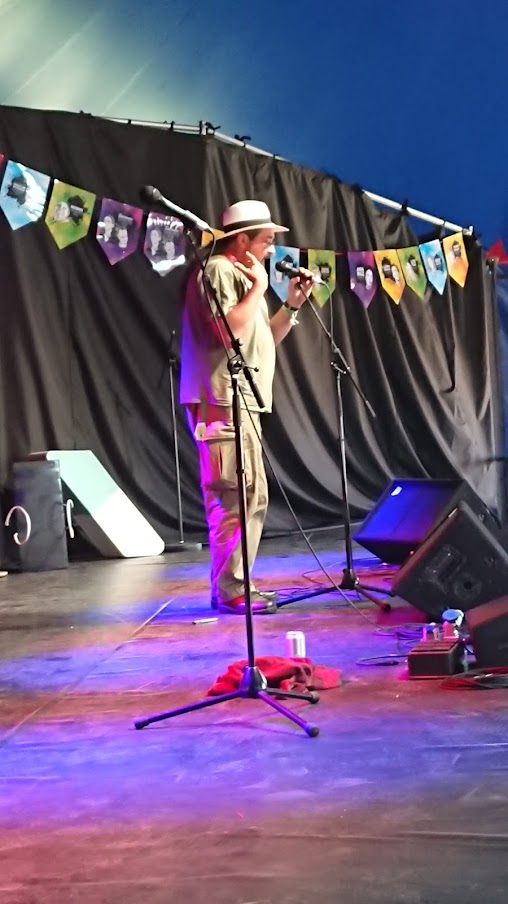 Torrey Shineman (@TorreyShine) (surname rhymes with Cinnamon, if you were wondering) gives us a poem giving us the history of vulva epilation (terrifying – look it up, also merkins) in response to current fashion (especially in her native US). 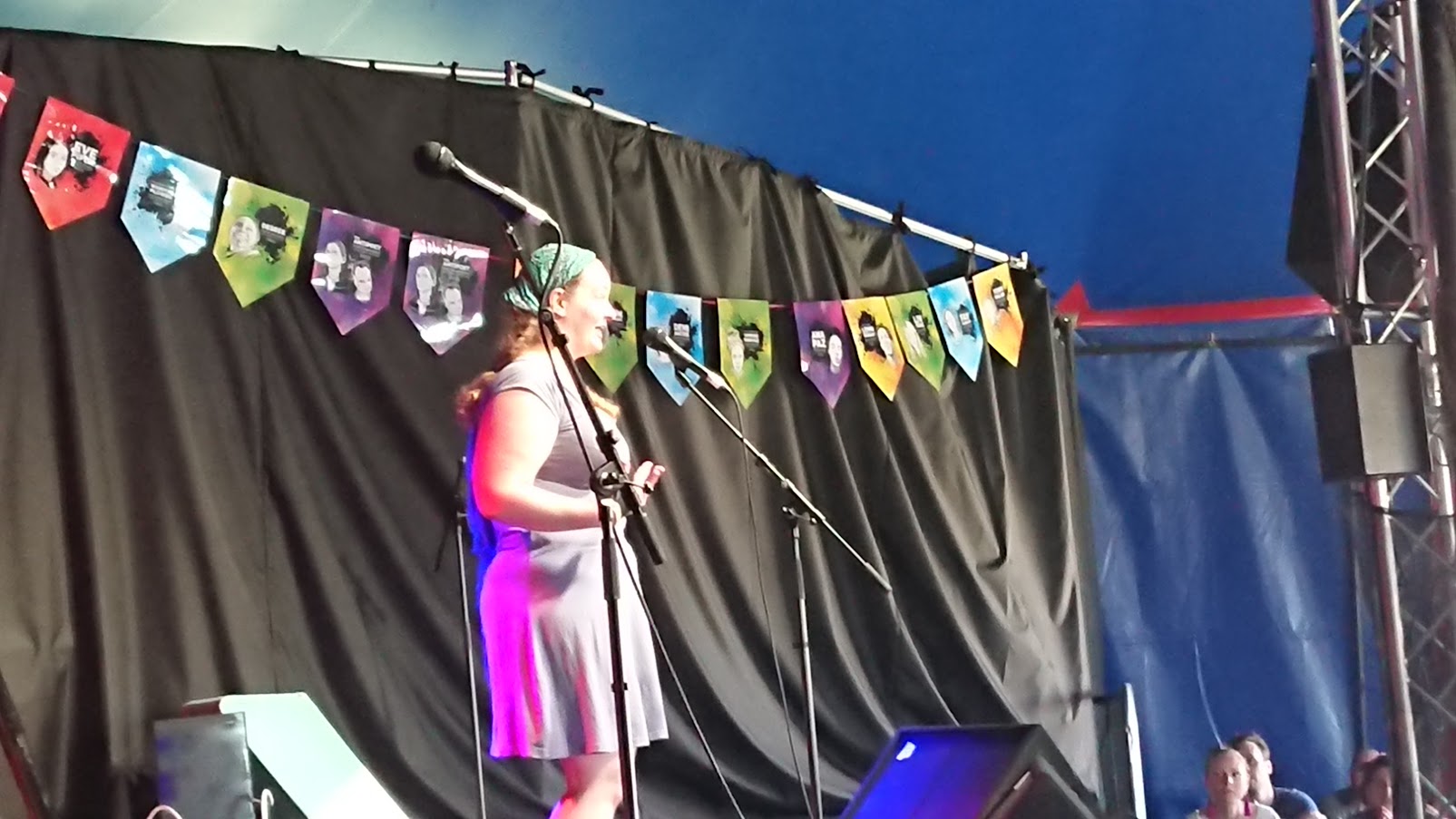 John Row (a refugee from the 70s spoken word scene and famous back in Cambridge as a storyteller in every festival within a 50 mile radius) has escaped the Kids’ Field to rant about the shame of the racist basis of migration policies. The crowd erupts! Chip Colquhoun (@creatorchip) is another professional storyteller from Cambridge, who was put down for this by John Row, and he brings us the one poem he’s got on his phone – a children’s version of Beowulf. He’s the first person to go over time, but curves it into a deft twist of finish (“If you want to know how it finishes, I think there’s a book about it somewhere…”) 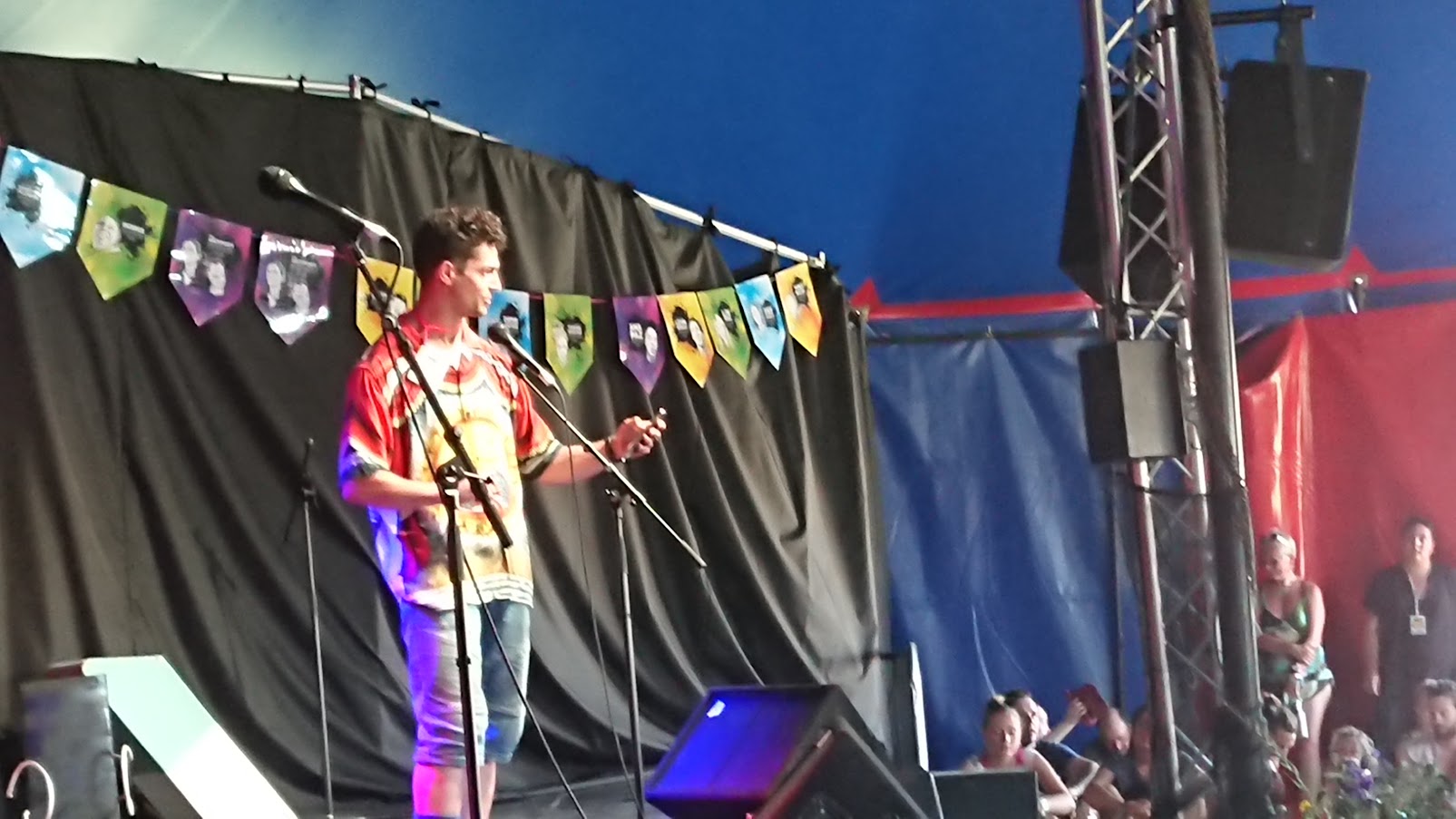 Loudspeka (@loudspeka) is a political, pacifist activist (“break the code, write an ode”) who rants a colourful exposé of big business, a confrontation that has the crowd whooping. Due to struggling with the technology (which hates the heat even more than I do), I missed getting a photo of her. Gah. Sorry! Check her out online anyway!

Bertram: That Geezerbird (“70% Skittles. Too excitable properly. Definitely at least the prettiest one here”) gives us a rousing rap about confusion that gets the crowd clapping in time as they bounce, skipping about the stage, then roaring as they leap from it. 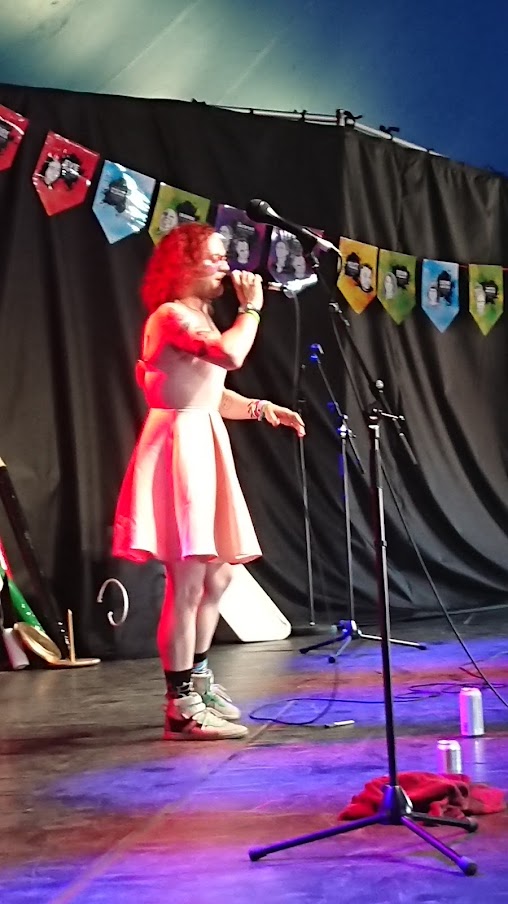 Robin Lawley, who came third in the last Glastonbury Poetry&Words slam, absolutely changes the atmosphere (the proper joy of open mic, folks!) with an ode to a departed cat, gentle and personal and absolutely in the spirit of Jeremy Hardy who he’s just been a part of memorialising. 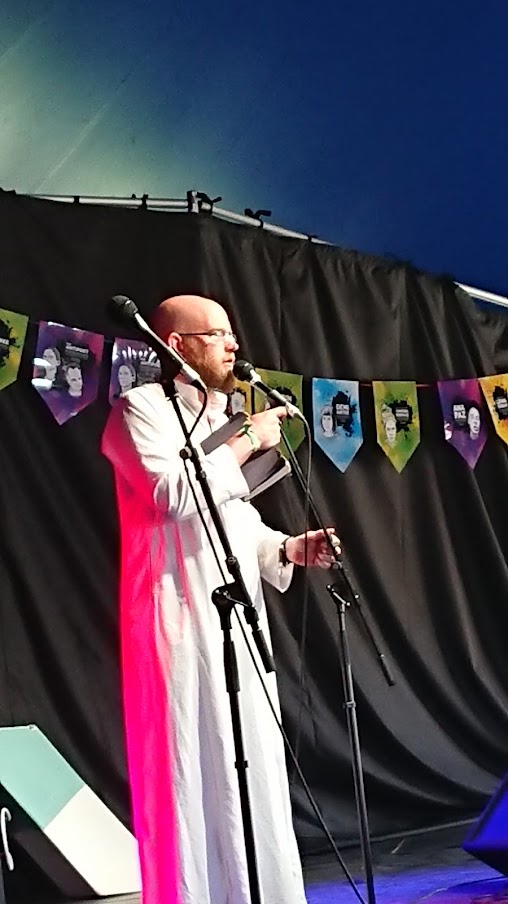 Jason Butler (@oldmanvegas) gives us a rapidly rhyming anecdote about an escaped crab. The crowd love this tale of late night seaside vengeance. Sadly, didn’t capture him either!

Ross Wallis gives us An Epistle, conceived a few weeks ago, and written while waiting in the huge queue to get into the Festival, an articulate, heartfelt apology to the next generation, fitting for an Extinction Rebel. 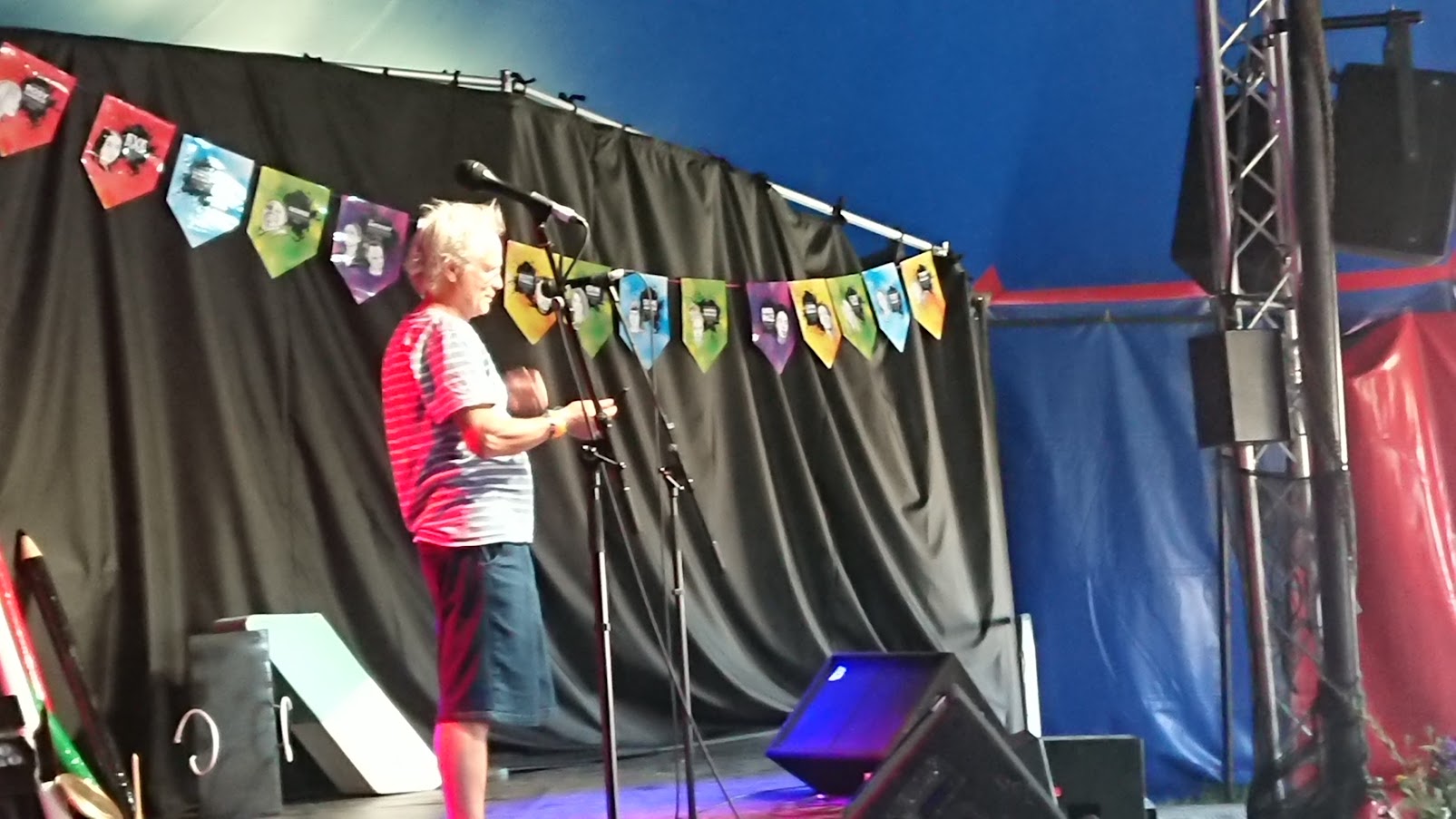 Ade Ogonboor DJ’d at Glastonbury a few years ago, got home, got cancer, beat cancer, and is back here, now, in the Poetry&Words tent talking with great, quiet articulacy about austerity and Brexit. He then continues to barrack various of the performers, including commenting on Rosy’s legs (she bats him down with superb poise). 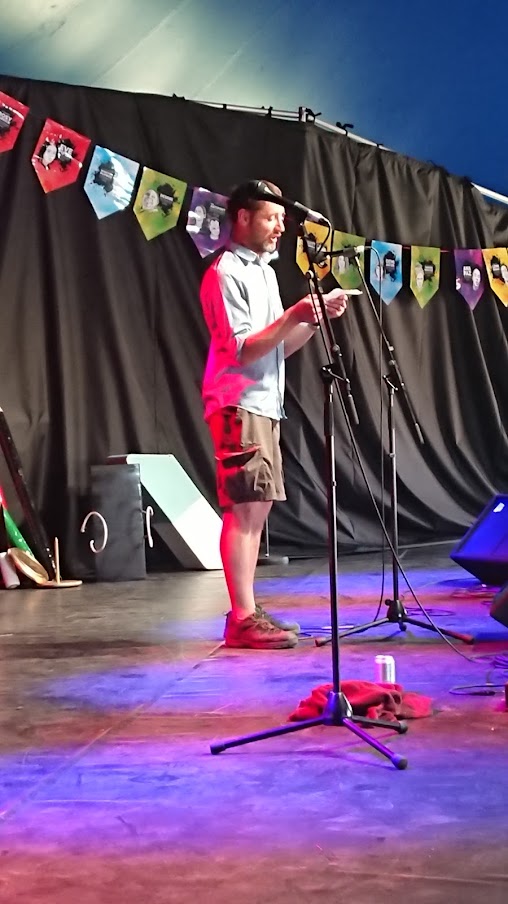 Sunny Jim (@_SunnyJim) gives us Plastic (W)Rap – an environmental activist with a hip-hop inflected angry gesture to the sea of plastic and its source, literally heat-stroked and (figuratively) erupting with ire. 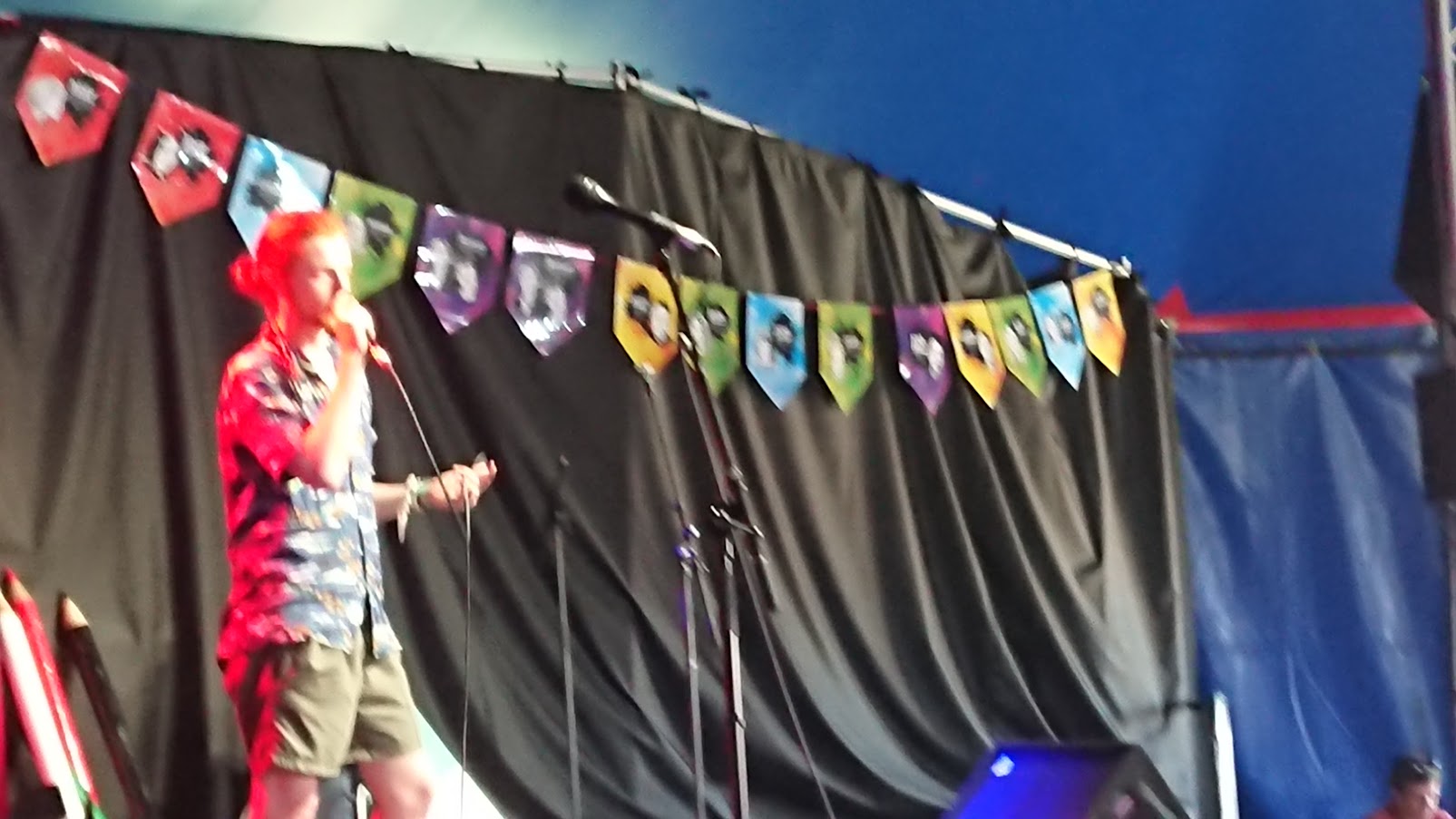 Rosie Solomon (@rosiees7) is a surprise finish to the open mic (again: we’re under-running, somehow!) with a rant about working in a bar – Don’t Tell Me How To Pour A Fucking Pint. It’s exactly what you’d imagine, and really, really good – a rallying cry to service workers and female-presenting people everywhere. 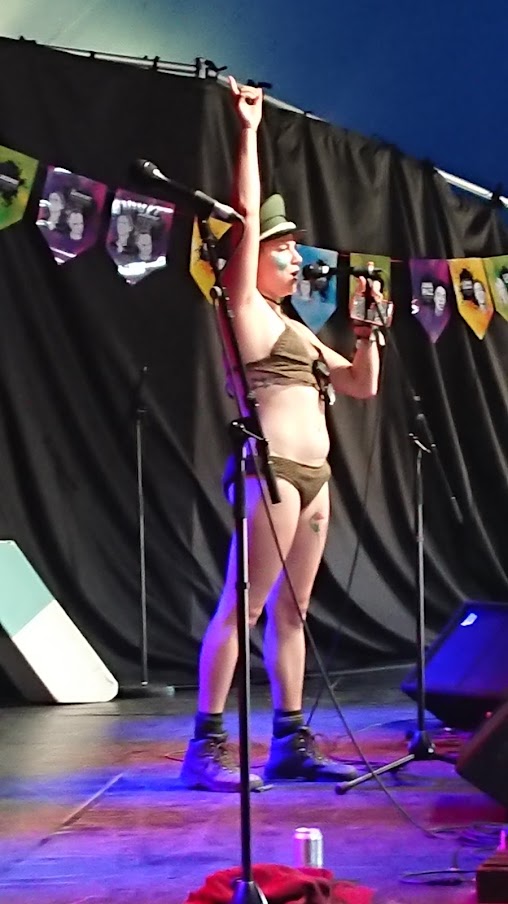 Festival veteran Jonny Fluffypunk roars onto the stage (yet another pair of dungarees*, this time looking like they were part of the previous wave of dungaree-wearing; authenticity in every thread) and shortly thereafter plunges into the audience to shriek at them about their place in proceedings (giving the poets the attention and validity they crave, obviously). He gulders about the foolishness of “poetry being the new rock ’n’ roll,” and entirely blows his own theory by being the punkest thing on stage (with the possible exception of Paul Eccentric) so far. As ever, it’s somewhere between the most cynical of stand-up, almost more time spent on the between-poem ranting and banter, and break-outs from the pieces to address the audience in a fourth-wall-smashing series of pithy jabs and bon mots about his good words. The audience are quiet but intent, absolutely with him in every line, cackling and whooping, sniggering and raising hands, lobbing ripostes every so often. I’ve seen him do this very set several times, and it’s still delicious, and I’m glad I’m here to witness it in its natural environment.

*My memory is made faulty by unwitting dehydration – photographic evidence has him in practical combat shorts. Can you even believe anything I write here? Probably… 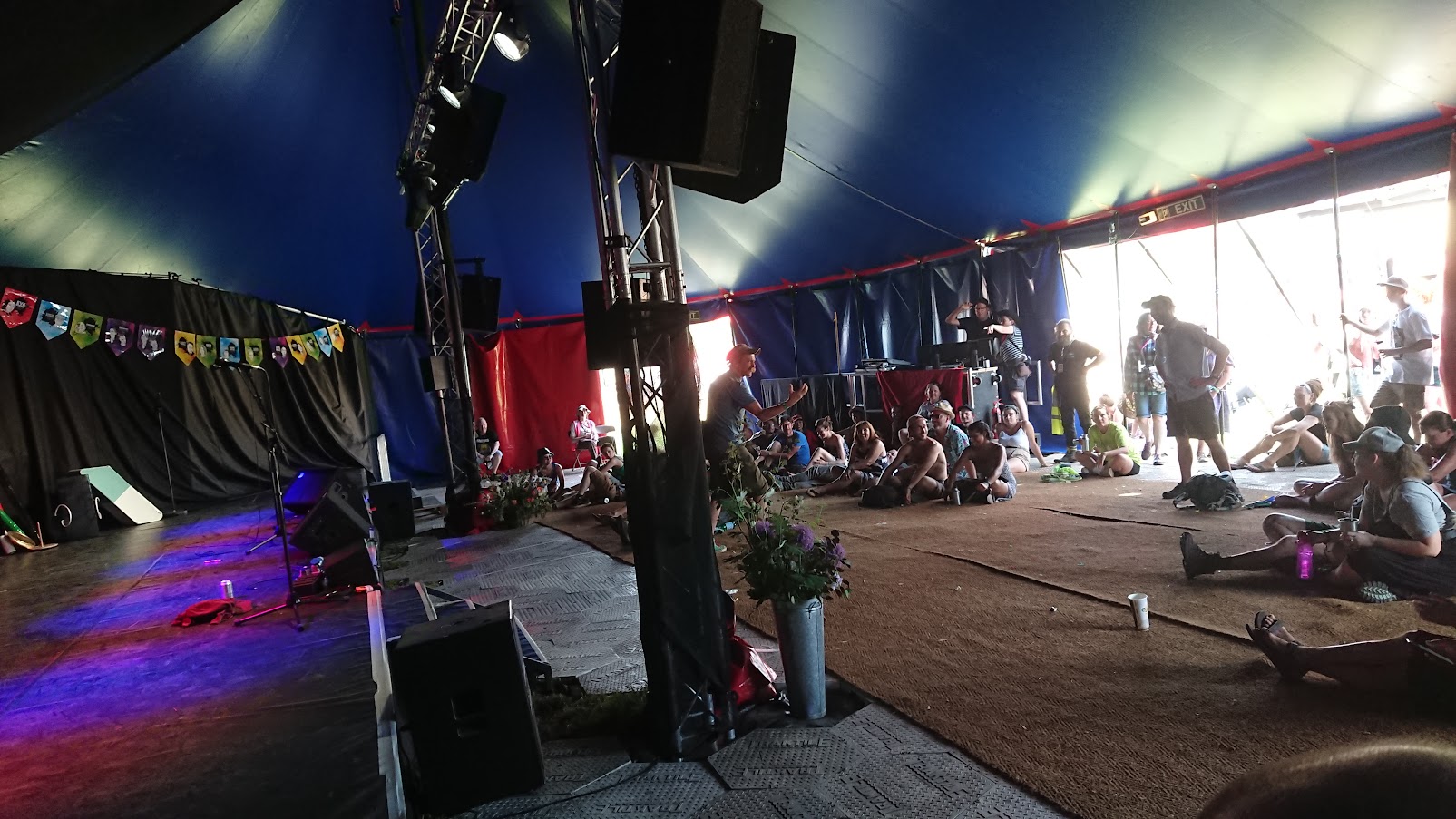 Demi Anter sashays onto the stage through the batwings, bogling with Dominic to the fantastic music she’s gifted by the technician and resplendent in a yellow dress that’s perfect for the shimmy. She reveals later that she’s a daughter of desert – despite her Celtic colouring, this heat just bounces off her. And so this leads us into a poem about her mother, and today’s set continues to be more about family and travel that yesterday’s. Still hypnotic, personal, anecdotal, deeply emotional where anecdotal poetry sometimes puts a barrier, a safer distance between the performer and their truth. But her courage is “seemingly unending”, and this theatre turns into a polemic about how to be truthful in the world of spirit and heart. She finishes with the same end dating site-like piece as last yesterday, but – in a tribute to Ana Paz’s “amazing use of space” – she unhitches the microphone and strolls around and bends into the space and suddenly it’s even more theatrical and, somehow, funnier (and more terrifying). 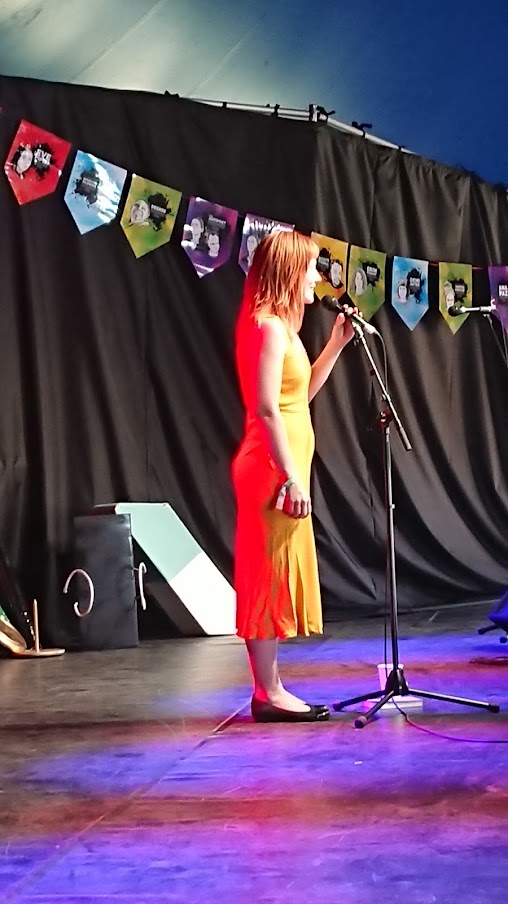 Illustrator Scott Tyrrell takes to the stage after Dominic gets the crowd screaming “as though Boris Johnson had left politics” to a classic rock track. He opens with the title track to his book (“(If We’re Being) Honest”), something that is, essentially, a list poem, but a superior example of the species, uncomfortable and hilarious, and waaay too intimate (I know a lot more about his masturbatory habits and his relationship with his cat now). It’s followed by one of my favourites of his: Bad Dad, swiftly seguing into Gabriel, which starts with a kind of “kids say the funniest things” intro and turns to a paean to platonic male love. Scott excels in awkward emotions and the kind of social observations that any high-flying postmodern author would be proud to display with this level of skill, plus any number of killer last lines. Wonderfully, with his intro to the famous (awkwardly, gleefully, hilariously erotic) Coitus Interruptus, he even manages to embarrass himself, charming, blushing even further than the heat (“Hello! I’M DYING! I’m not from the desert – I’m from the North-East!”). He moves onto the tender Blue Badge of Honour about his beloved, disabled wife which is the one that made me drop my pen and wipe my eye when I first heard it. It’s still powerful, still delivered with loving rage (“I am the feather to her fortress…”).