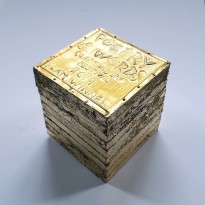 And to finish everything off is the famous Glastonbury Festival Poetry Slam, 17:00-19:00 Sunday. If it’s new to you/ you’d like a reminder, read on:

Important points the organisers would like you to note:

Brian MacMahon Gallagher and Thunderclap Murphy will be your hosts, and their decisions re: any of the above administrative points will be final.

I love me a slam. My first introduction to performance poetry that wasn’t in Welsh/ someone else’s words/ both was watching my brother, and other competitors, slam in what turned out to be one of the earliest UK slams in Cardiff’s Chapter Arts Centre in the mid-90s. Of course, competitive poetry recitation is something we Welsh had been doing for centuries (see Chairing of the Bard, and the modern Welsh Eisteddfodau tradition for examples – yes, 200 years old is the modern version…), but this was dynamic, and sharp, and immediate and – more importantly – democratic; each event’s bard chosen by the acclaim of the people.

Almost exactly three years after I moved to England to the day, I entered a slam for the first time, mostly as a favour to a friend. It was a bit of a turning point. Say what you like about slams (and I have), but they’re an amazing way into poetry for a lot of people – performers and punters. I’ve been running slams for {checks memory; whoa!} twelve years now, and am showing no signs of stopping. People bring something unique and adrenaline-fuelled to slams, and the audience gets very invested in the outcome. This year’s Glastonbury Poetry&Words Slam will be no exception, with a pretty amazing prize plus epic bragging rights. I’m looking forward more than I can say to the finale of this year’s Glastonbury Poetry&Words!