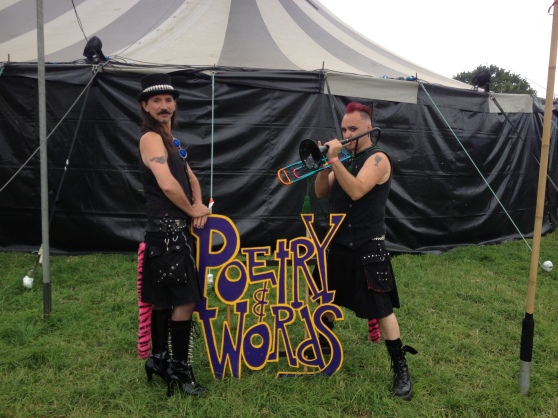 Back to kick off each day of poetic festivities are The Antipoet, 11:30-12:00 every morning. If you’ve missed them until now, read on to find out a little more…

In their own words:

“Paul Eccentric and Ian Newman are The Antipoet. They are a comedic beat poetry duo that have been going down rather well for over eight years now and have performed at countless poetry, comedy and music events across the UK. Festivals include; Glastonbury, Brighton, Ledbury, Edinburgh, Camp Bestival, Camden, Wenlock, Larmer Tree, Nostock, Green Gathering and Buxton. They have also performed at Silverstone for the Grand Prix and this year’s tour will add Rebellion and Bestival and they will also be warming up for Adam when he bring his 2016/17 tour to Paul’s home town.

“They are absolutely delighted to be the pre-show act for Poetry&Words again this year. They will be performing, among others, pieces from their sixth and latest collection, ‘We Play For Food’ as apparently Poets aren’t actually paid that well, who knew?”

I’ve been watching The Antipoet on stages all over the UK since November 2009 (and sometimes joining in). I make no bones about the fact that I love the work they do – silly, irreverent, sharp, wonderfully garbed – they are a spectacle as much as they are a aural delight. I can think of no better way to kick off each day at the Poetry&Words tent. A rockstar double-bass player with terrifying harmonising skills and a punk singer/ percussionist/ professional ranter flinging his words around harder than he flings his arms, both with immaculate nails and eyeliner? Count me in!

5 thoughts on “Introducing: The Antipoet”