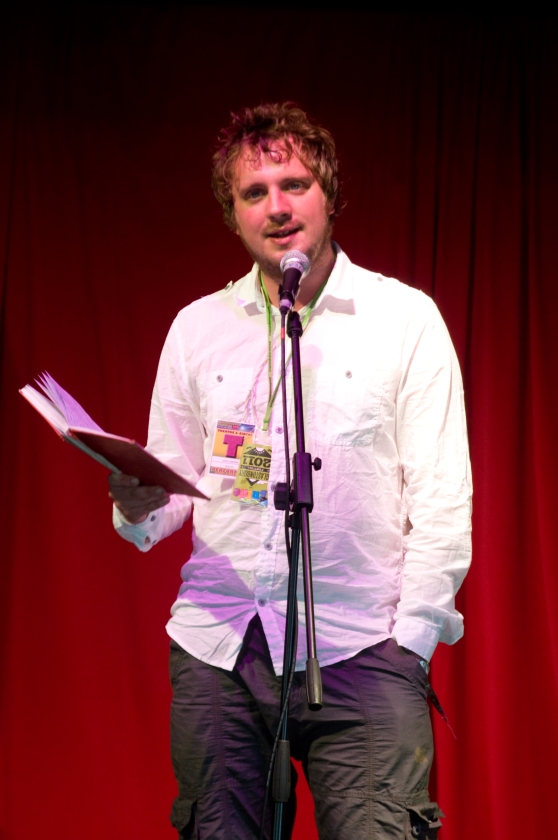 Q1) What is your connection with Poetry&Words?
I’ve performed in the Poetry&Words tent twice. In 2011 I did a couple of solo sets there, the previous year I did it as part of Aisle16. I remember that set being really fun; drunk and ramshackle but all the better for it – exactly what festival performances should be.

Q2) If you had to describe the Poetry&Words stage in just three words, what would they be?
Full when raining.

Ed. Ouch!  We’ll let you get away with  that, because we like you;  but we have testimonies and photographs to prove we get a full house in the sunshine too 😉

Q3) How would you describe Glastonbury Festival to someone who’s never been there?
It’s actually hard to grasp Glastonbury without going. Certainly watching it on TV doesn’t do it justice. You need to climb to the top of the hill by the stone circle, where the flags are, and look down at its vastness. It’s always a special moment standing at the top of that hill. Even more so in 2013 after having a year off.

Q4) Can you name two other poets who you admire?
My favourite poet is Ross Sutherland. I love his books, I love watching him perform. He has more ideas in one poem than most poets do in an entire collection. He’s one of the first poets I ever saw perform and it’s still as much of a treat every time it happens now.

Another poet I really love at the moment is Rob Auton. He runs Bang Said The Gun, the most enjoyable spoken word night in London, and his material is consistently funny, interesting, unique. I love the way he uses a controlled surreal humour; it’s always rooted to the everyday but goes on all sorts of adventures, storytelling and making little worlds out of nothing. His 2012 Edinburgh show was really special too. The Yellow Show. It’s a show about yellow things. He makes me laugh for the same reasons Tim Key, Adam Buxton and Simon Munnery do.

Q5) What kinds of things inspire you to write?
Most of the poems I’m most proud of are the ones I’ve written when I’ve had temp jobs. For the last few years I’ve had maybe ten different temp jobs – Norwich Union, Anglia Windows, hotels, offices, insurance companies. If anywhere needs stuff filing, I’ve probably been there. I’ve always got through my day writing poems in notebooks about overheard conversations or people I work with or things that occur to me in that mind numbing state of data entry. There’s definitely something about boring jobs that suits poems. The other thing that inspires me to write is experiencing something special – whether it’s a film or a gig or a book, when something is done incredibly well it’ll remind me of how exciting it is to create things and I’ll start working on something. I quite often write poems when I’m reading poetry or good novels and think ‘I want to have a go myself.’

Q6) Where is the most unusual place you’ve performed your work?
At Edinburgh Festival in 2008, me and the poet Luke Wright did a gig in a swimming pool with the comedian Paul Foot. The audience sat on the edge, and we took it in turns to do lengths, or tread water, doing sets. It was so odd. It ended with a big game of volleyball. I remember when we were getting into our trunks in the changing room thinking ‘This is a weird thing to be doing.’

Q7) What are you working on at the moment?
I’ve just finished my new book. Don’t Need The Sunshine. It’s published by The AA next year. It’s about British seaside towns. I’ve also recently finished a poetry book, my first full collection, called Most People Aren’t That Happy, Anyway, published by Nasty Little Press. Other than that I’m working on some ideas for Radio 4, another Edinburgh show, and I present a radio show every week with Tim Clare on Future Radio. That’s always the highlight of my week.

Q9) Can we have a poem please?

It’s you I feel sorry for.
You hired the room
and when no-one RSVP’d
you assumed my friends were too cool to RSVP
so ordered a finger buffet for fifty.
My surprise birthday party:
four of us,
me and you, your mum and dad.
When I told you once I don’t like the idea of surprise parties
this was the kind of thing I had in mind.

“Maybe I put the wrong date on the invitations,” you said,
as the waiter offered us yet more crabsticks.
We both knew you’d have triple-checked.
“Not even Graham,” you said.
“Graham plays squash on Wednesdays,” I said
and blew out the candles on the cake.

Under the table were bottles of wine,
thirty red and thirty white.
There wasn’t even the chance to get a refund;
the receipt was in your handbag that had been snatched that morning.

By the time we sang the happy birthday song
the waiter was so pissed he’ll probably be fired
but anyone who can dance like that
is wasted in catering.

“What’s it like not to have any friends?” your dad asked
and we all laughed apart from your mum
who still had her coat on.
“Maybe there’s something good on the telly,” he said.
I’ve never liked your dad
but last night he played a blinder
juggling satsumas as we looked out the window.

It wasn’t a special birthday.
I was 29, a prime number.
No-one gets excited about prime numbers,
but it reminded me of the time I was at Graham’s house
when I pulled down my trousers and pants
and showed everyone the massive bruise on my knob.
I just thought more people would be interested.

Q10) Where can we find out more about your work?
www.johnosbornewriter.com